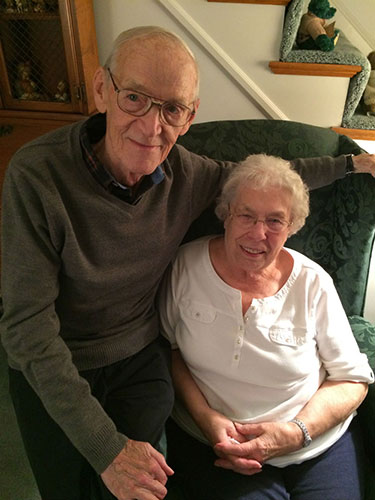 Ernie’s motto in life is, “Speak up and make sure you are heard!” He finds this important at church, but especially during his career as a teacher.   Lorraine spoke up as a 16 year old and president of what was then called “Luther League.” She was the first woman to give a sermon from the pulpit at St. Paul in that role. They’ve been to London about 25 times and have met the famous Judi Dench three times! Ernie finds love in their family, especially in all the ways they agree to disagree. He says, “My kids tell me off often and we love each other.”  Lorraine finds love in the theater group, Arlington Friends of the Drama. Over the last fifty years, she has made a cake for almost every show that matches the cover of the program. It is in this theater group that Ernie played his best role, Felix, in “The Odd Couple.”  Their wisdom after 53 years of marriage is that “We don’t speak for each other,” and “We put up with each other!” On Sundays, you’ll find them at the 8:30 am service, after breakfast at Teddy’s, where Ernie can be heard saying the prayer intercession for all those who are sick.