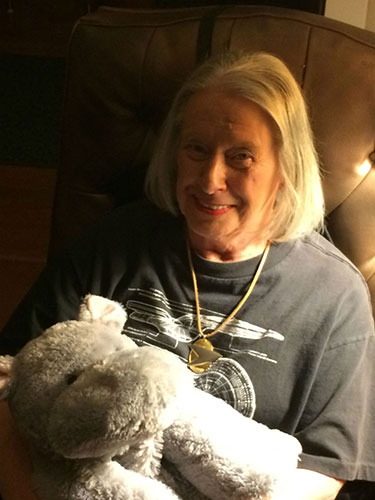 "There is a translation of the book of Job in which hippos are named as masterpieces of God’s creation,” says Sue. It is from this translation, that she and her late husband, Thayer, heard during a Lenten sermon series a few decades ago, that their love for hippos began. You will find this collection scattered among her house in the form of stuffed animals, candles, cookie jars, and chimes (the list could go on!). Coincidentally, Sue and Thayer were even married on the day the church celebrates Saint Augustine of Hippo in 1967, seven years after they were set up on a blind date. Sue is a retired mathematician and split her career between the MIT Aeronautics Design Department and Lincoln Labs doing classified ballistic defense work.  Recently, Sue was challenged at St. Paul when reading “Waking Up White” for the Women’s Book Club as it forced her to think about the whiteness of the communities to which she belongs. Most days Sue can be spotted at the senior center where she exercises, enjoys the lunches, and attends lectures. Last week, the lecture was on grief and that has her thinking about her own experience of loss as she ages.  She relishes in all things Star Trek, the zoo, and being an aunt and godparent.