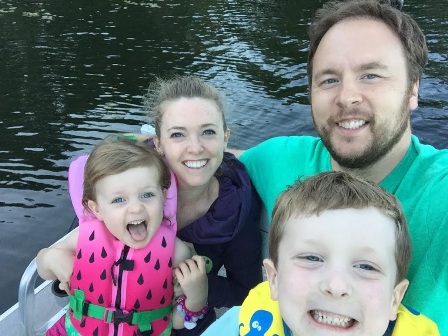 “Prayer is like blinking. If you don’t do it often enough, it dries up,” says Joe Case in his relationship with God through prayer. Joe has been a member at St. Paul for over eight years. During that time, Joe has enjoyed community life, especially as a Sunday School teacher. As a lifelong Lutheran, Joe has taken his faith many places, including his time at Columbia University in New York, living for a time in France, and now as a husband to his wife, Meredith, and a father to two children, Wyatt and Sienna. Growing up in Sioux City, Iowa, Joe’s parents and church community at St. Luke’s Lutheran Church fostered his relationship with God. He distinctly remembers when his father was a general Protestant, but not Lutheran. Over time, his mother converted him and he is now heavily involved at their home congregation. In Joe’s life outside of church, he returns to God’s hidden presence by saying, “I feel like God’s presence isn’t always obvious. Like, before this job interview today, I prayed. Was God listening? Yes. Did God answer my prayer, though? Maybe my prayer was answered, but not in an obvious way. God is always present and available in these moments, but I wish I appreciated it more”. Looking to the future of St. Paul, Joe thinks that the sermons and forums should be posted on the website as an archive so that more people may have access. In his spare time, Joe enjoys playing basketball and spending time with his family. Next time you see Joe, ask him about his time playing basketball in France. ​