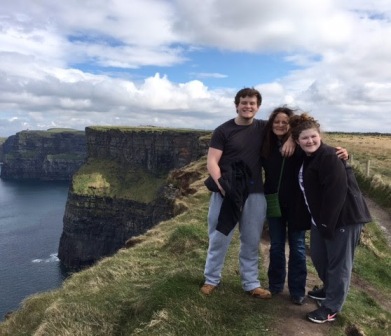 “When I joined St. Paul, I felt so embraced and welcomed”, says Taryn Walsh on the reason why she joined St. Paul twelve years ago. From an early age for Taryn, who grew up in the Catholic Church, a vital piece of experiencing God’s presence at church were the ways people supported each other. A particular memory stands out for Taryn when she first experienced God’s love at church by saying “there was a priest who had really great ideas on including the kids into church life. I remember when he gathered people together to check-in with each other, so that we could stay connected all the time”. Having worked for many years in the unpredictable film industry as a costumer, Taryn knows the importance of the stable community that church offers. Her talents go well beyond the movie industry, too. She sings in a rock band, she goes on lengthy bike rides, and likes to explore the surrounding areas with friends and family. Taryn is a mother of two children, son Jeremy and daughter Adele. On Sundays, Taryn gives her time and services in many ways including ushering and helping the altar guild. For the last couple of weeks if you walked into the church offices, you may have seen Taryn filling in as parish administrator. The next time you see Taryn, ask her about the past, current, or next movie project she’s working on! ​