The Source of our Power is our Hearts 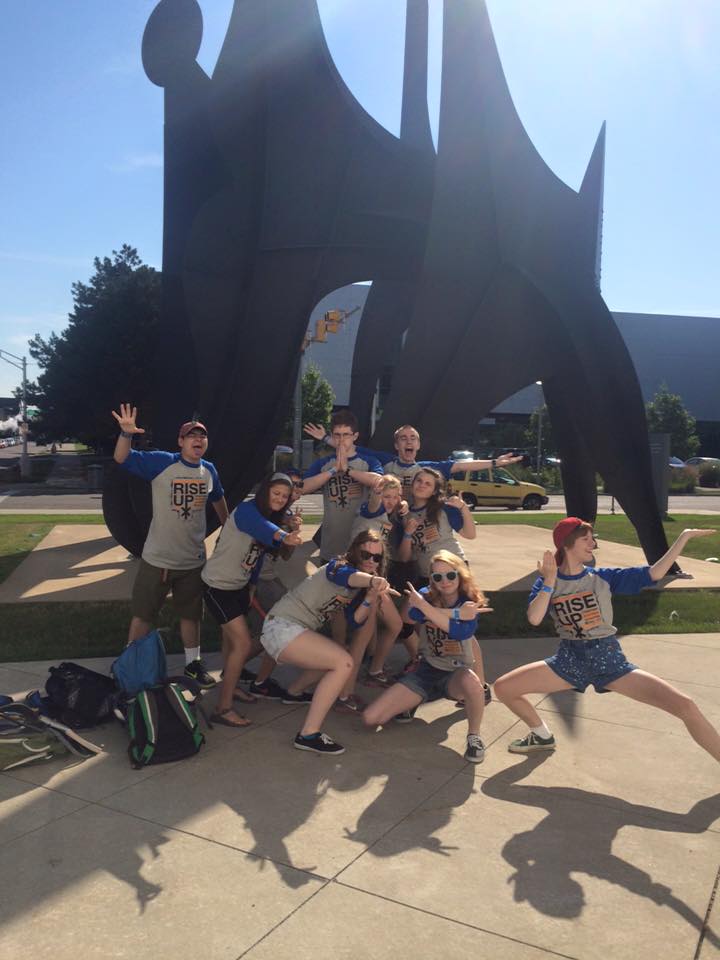 “Zach. Zach. ZACH!”It was 7:45 AM when I stumbled out of my soft comfortable cot, to the sound of a 15 year old boy yelling at me (not fun). I walked to the door of the hotel room, in a zombie like fashion, letting my stomach, and my roommate's voice, lead the way to the breakfast room. We waited for the elevator and thought about today’s activities. I knew that today would be our “work day” but I had no idea what that meant (and I don’t really think I cared, I was hungry). I reached the small room on the 56th floor and got my breakfast.  The GM building sure was nice. It was really tall, with nearly 70 floors, and it was in close proximity to all the kinds of food you could imagine(which made dinner all the better), but this was still Detroit, and I knew that I hadn’t seen anything yet. I walked back to the elevators and rode it back up to the 59th floor.

I ate my eggs and bacon, and drank my coffee which was also accompanied by a Detroit newspaper (which I didn’t really read). I sat with my friends Toby and Adam. We were quiet for the most part and did our normal morning routine (eat, use bathroom, and try very hard to not be late or forget anything, especially me).

I changed quickly into my blue jeans, which turned out to be really hard to work in, my Rise Up t-shirt, and my work boots. I slipped on the old rough work gloves I had received from Meghan, as I forgot to pack some. Then, I found our counselors, Eric, Meghan and Pastor Stendahl, as well as my friends from my church (St.Paul) and from LCN, a church in Newton.

Some of us had not woken up yet so we waited a bit, until all of us gathered together to debrief the day the ELCA had planned for us (so much fun).

When Eric and Meghan were done talking, we all walked to the elevators to head to our “target” area. It was a street in Detroit which was under a state of crisis. The people who had once lived there had been forced to leave due to the city’s financial misfortune, but some still remained. Our mission was to help these people and try to shed some light on the houses which had been deemed forsaken by those in the higher up positions.

I walked with my group and we reached a bus stop. The bus stop was crowded with kids. Trying to get through was like trying to run through water in concrete shoes. I was pushing my way through and I laughed to myself when I thought of myself as Moses parting the Red Sea. But, soon enough we reached our bus and followed the young guide onto the super awesome tour bus, with TVs and everything (but they didn’t turn on, bummer).

As we took our seats on the bus, the guide greeted and talked to us about the trip. She said “ We are really glad you are here to join us. Now we will be working in the sun and it is really hot out there, so don’t forget to drink water,” The guide went on for about 2 minutes and it was really basic until she told us “If in any case, you find weapons or drug materials, please do not touch them and report to an adult.”

I began to feel a little scared by the comment and ate my lunch timidly next to my window. I had been warned about how dangerous Detroit was and awful the “broken” parts were. I felt truly scared and felt that some Ice Cube looking dudes were going to shoot me, which I know is really, really, racist but on with the memoir.

We finally reached our destination around 20 minutes after the bus left. We got out and the sun was burning us with its powerful rays, and I was having trouble staying hydrated. We walked up and were assigned houses on the street. I was assigned to a really beat up house on the curb of a street. This house was obviously abandoned and its grounds left unattended. All the windows were either broken or gone completely and some windows had rotten plywood covering them. The grass and weeds were at knee length and trash littered the front yards. We had no tools so we started going through it with our gloved hands, ripping out leaves, picking up trash, it was some hard work. Soon enough, a good amount of kids who had been there earlier left, leaving us with the tools we needed to cut the high sea of grass.

After about an hour’s work we took a break from the terribly hot sun and gathered in a more shady area. There, a woman explained the situation. She said that she ran a group in the area that tried to get help for their community. She said that when she had heard we were coming, she called our group and had only expected a couple hundred kids, not 30,000 kids over a whole week! She had tried so hard before and this was like a blessing for her and her community.

Then I noticed how different the street looked after everyone had left. Sure, there were still abandoned houses, but it looked cleaner, more inhabited..I also realized something about the community. They had suffered so much, but that did not mean they gave up.

This was where they would show their strength and power. They might not be the Mayor, or the governor, but they were determined to change their home for the better, and to show that we can create change on our own. This was their power, and it came from their hearts, something that I didn’t realize about Detroit. This helped me to change my view of Detroit and of the world and, in turn, changing me. This is how Detroit changed me.