Trying to Buy a Gun 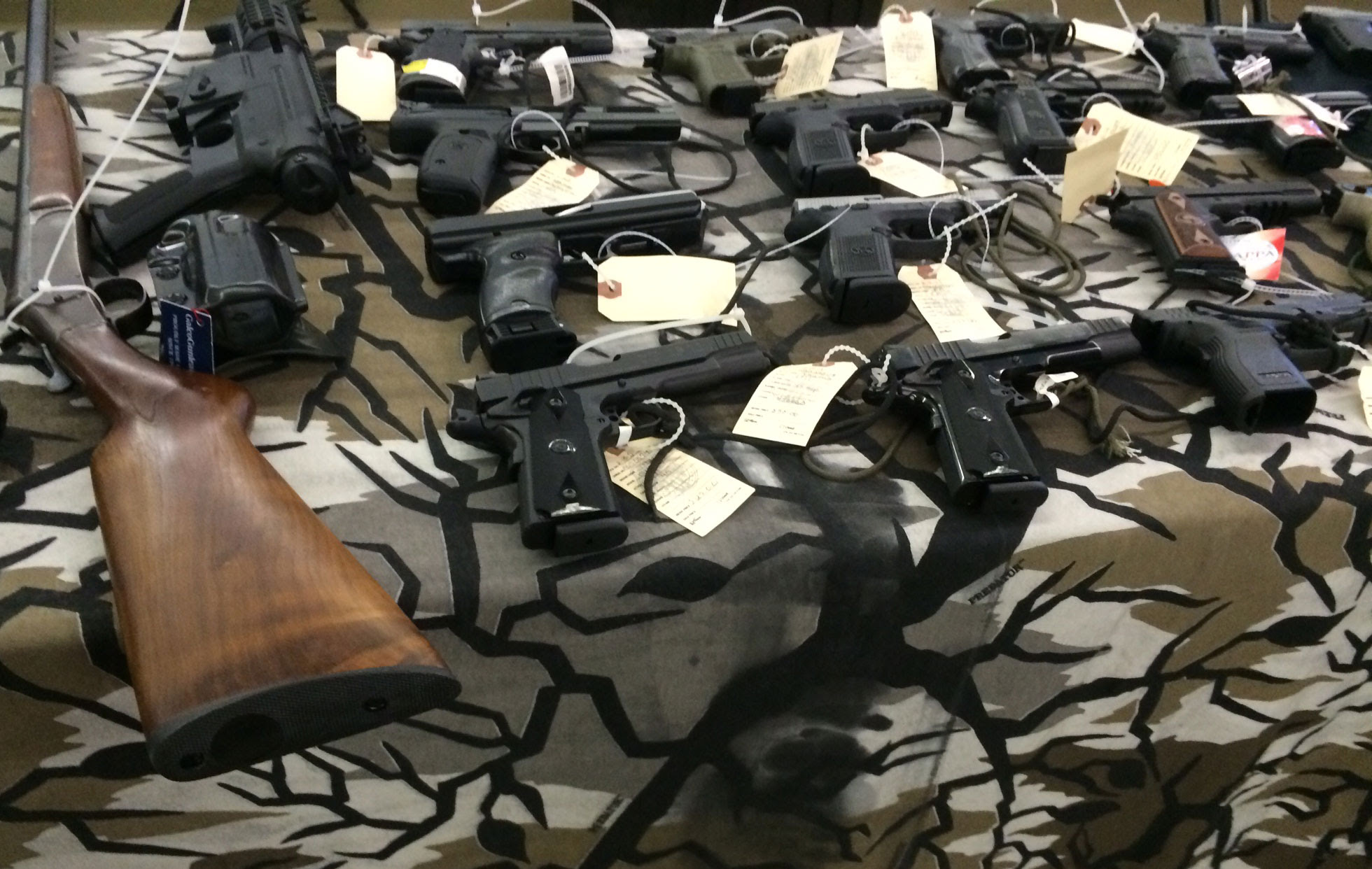 Between the shootings in Charleston, SC and Roanoke, VA, not far from where my son was at a music camp in Greensboro, NC, I noticed a place next to the mall called Firearms Supercenter.  With an hour to spare, I thought I'd go in and try to buy a handgun.  Why not find out what this gun business was about first hand?  Firearms Supercenter was the size of a Target (no pun intended).  The parking lot was half-full in the middle of a Thursday afternoon and I was impressed to see that the center of the store had a huge display of gun safes.  If you've never seen these, they are massive and must weigh a ton or more.

Along the back of the store was a counter with hundreds of handguns under glass behind which were the rifles, shotguns, and what looked like assault weapons.  While waiting for help, I perused a gun magazine and read how to protect your family from home invasion.  Basically when you hear intruders, you put your wife and children in a safe room on the second floor where they call 911 and then move to a spot at the top of the stairs where you can shoot them (after you warn them).  I played this out in my mind with my own family and successfully killed the intruders.  I can't remember ever reading about this actually happening.

The salesman was friendly, and extremely knowledgeable.  I asked to see a "Glock" because that's the only word I knew when it comes to guns and was relieved when one was nearby.  He let me handle lots of big handguns and showed me how they worked.  I pulled the thing back on the top and let it slide back forward and I shoved in a magazine (unloaded) in the bottom of the handle just like in the movies.  I noticed a dad and his approximately 10 year old daughter peering into the case nearby and the movie moment passed.  "How much?" I asked.  The one in my hand at the time was new for $495.99.  "How do I buy this?" I asked "Do I just give you my credit card?"  He explained that we'd have to fill out some paperwork first and it would take a couple of days to get it cleared by the sheriff.  He noticed I looked a little surprised.  I thought it was going to be like buying roses, thanks to my having a lot of freedom to have what I want when it come to guns.  When he learned that I was from MA, he politely explained that the store could only sell to folks who can prove that they live in NC.  "Come on, really!" I said, but he explained there was no way I'd be able to buy a gun, not even at a gun show.  I later learned that that what looked like assault weapons weren't (he said they were banned in 1994) and that there were weeks of waiting and classes and talking to the sheriff if you wanted to carry a concealed weapon.

I'm happy to report that even as an upstanding citizen with no criminal background, I utterly failed at trying to buy a handgun and plan to spend the $500 on something else.  I was glad to some semblance of checks and balances and hear of safeguards and a sheriff watching over who has a gun.  I won't try this again in my home state as I was thoroughly satisfied with my Greensboro efforts.

I'm sorry to tell you that that the assault weapons ban expired in 2004 and has not been renewed.  The best we could do was ban high capacity magazines in 8 states, including MA.  I did not and will not watch the shooting in Roanoke and am disturbed again by a story of a disturbed person acting out his anger with a handgun.  The Boston Globe tried to keep the sense of shock with the headline "SLAUGHTER FOR ALL TO SEE," but the same story by New York Times reporters ran under the more subdued "Gunman Kills Two On Air and Posts Carnage Online."

We have become numb to the unrelenting toll of gun violence that claims one life every 16 minutes on average in the United States. Nicholas Kristof offered these three data points today as a reminder:

■ More Americans die in gun homicides and suicides every six months than have died in the last 25 years in every terrorist attack and the wars in Afghanistan and Iraq combined.

■ More Americans have died from guns in the United States since 1968 than on battlefields of all the wars in American history.

■ American children are 14 times as likely to die from guns as children in other developed countries, according to David Hemenway, a Harvard professor and author of an excellent book on firearm safety.

The numbness has resulted in a lot of learned helplessness about this issue as if nothing can really be done.  No amount of carnage seems to shock us into seeking some common sense.  If viewed more from the perspective of public health we also might take a closer look at mental health and the health of local communities across the nation.  The freedom of an individual is sacred in our nation, but so is life.  While government regulation can't fix everything and sometimes does more harm than good, we desperately need some intervention beyond individual freedom of choice.  As Kristof noted: "Surely we can regulate guns as seriously as we do cars, ladders and swimming pools."

8:15AM | Worship with Holy Communion (no singing)