A Mosque, Muslims and an Imam in America 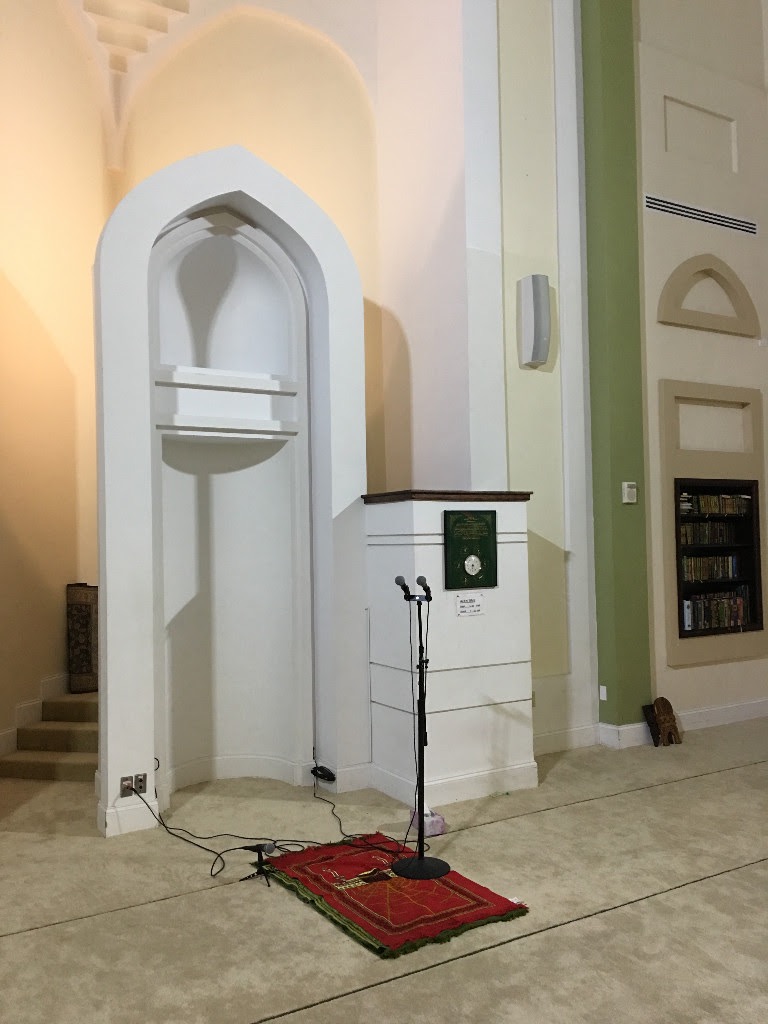 Last Tuesday night I went to the Mosque in Roxbury with our new foster son, a devout Muslim from Somalia.  He came to church (St. Paul) for the first time in his life a couple of weeks ago both out of curiosity about his new family and from studying Christianity in his world history class at high school.  His interest in my faith and practice renewed mine in his.  At his suggestion, I called and made an appointment to visit the new Imam, Shaykh Yasir Fahmy.  Shaykh or Sheikh is and honorific title for a prominent cleric.  He has office hours Tuesday night and Friday afternoon.  Even with ten minute slots, there is a long line.  We were advised to come Tuesday since 1,400 worshippers are there on Fridays at 1 p.m.

The Mosque is really the Islamic Society of Boston Cultural Center located on Malcolm X Boulevard across from the Roxbury Crossing T.  With no traffic it only takes about 20 minutes to get there from my home.  Open in 2009, the center is a beautiful, complex facility with a central worship space surrounded by a restaurant, store (books, clothing, etc.), multiple meeting spaces and classrooms, and a parking lot.

While waiting for our appointment, we were welcomed at the door and were free to wander around.  It felt like a very relaxed place where people were at home.  People smiled and said hello to us.  The security guard left his post and gave us a tour during which he and my foster son discovered that they were both from Somalia, leading to a flourish of laughter and words in their native tongue.  We removed our shoes and walked into the prayer area on new luxurious white wool carpeting.  Front and center is the Mihrab (pictured above), an indentation in the wall which marks the direction of Mecca so that all Muslims pray, facing the same point on earth.  We wandered downstairs to a room lined with sinks and stations designed for washing feet.  An elder happened to be there, and, noticing how little I knew, gently offered to show me how the entire ritual was done.  It was an unexpected gift to observe up close and understand this practice as devotion/obedience to God and preparation for prayer.

Finally we were called into the senior Imam’s study and I was determined not to take too much of his time, given my/the imagined needs of his immigrant community.  Born and raised in New Jersey, he had only been there two months.  I told him I went to seminary at Princeton and he said a Lutheran Pastor there was a good friend.  I told him my purpose was to see where my new foster son worshipped and a desire to support him in his faith.  He invited us back in a few weeks for a longer visit.  (More on that later.)

I am aware that this Mosque and others around Boston have been controversial, especially since 9-11.  While a quarter of the world’s nationalities can be found at this one, their annual report states this mission: “To teach and live Islam in America.”  Moreover, their vision: “To build a community of leaders rooted in the Islamic tradition, committed to American ideals and empowered to serve the common good.”  Sometimes there is nothing like showing up and being present.  Most of us cannot even imagine what it’s like to be a Muslim in America.  I’ve never seen a church’s vision or mission statement include the word America, even though I am a pastor in the Evangelical Lutheran Church in America.  I often forget where I am.  There in the Mosque, I caught a glimpse of a diverse community that named something I often take for granted: America.  As I looked at the cover of their report, I also noticed something familiar.  The Center seeks to gather into community, grow spiritually, and give back to the world.  Indeed, I entered another world that evening with much yet to learn, but there was a sense, and the hope, that we have much in common.