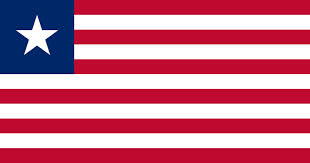 A member of our congregation is leaving for Liberia next week as a short term missionary for two months. I just happened to be married to her. I am not only proud of her willingness and ability to do this but also that Janice goes as part of our denomination’s global mission effort to make a difference in one of the poorest countries on earth.

Liberia is a tiny English speaking country in West Africa on the equator at the corner of the continent where the coast line turns due west. It’s about the same size as Virginia but with 3 million less people that Massachusetts (3.7M). On many lists it’s the second poorest country and some 85% of the population lives on less than a dollar a day.

The Liberian flag offers a big hint at its history. It looks like the U.S. flag but with only one star. That’s because it’s the only country founded by American colonization which began in 1820 as former slaves were sent there in the hope that this was better than remaining in the U.S. The capital Monrovia is named after our fifth president James Monroe.

The Lutheran church has a mighty presence there and many of you might remember former vicar Moses Dennis from Liberia who now serves an immigrant congregation in Philadelphia. There are about 70,000 Lutherans in Liberia with over 385 congregations. The women of the Lutheran church began a larger movement to bring an end to a long and devastating civil war in 2003. A film we watched recently tells the story well--watch it here

For the last ten years the country has been on the road to recovery, much of it under the leadership of President Ellen Johnson Sirleaf who is both a graduate of Harvard and won the Nobel Peace Prize in 2011. She is the first elected female head of state in Africa. I’d like to think that our denomination’s involvement in Liberia and Janice’s two months of service are part of that comeback story. Janice will be guest faculty at the Mother Patern College of Health Science in Monrovia. She will be teaching a course on research to nursing faculty from around the country and guest lecturing in their graduate school of social work. The hope is that raising the level of nursing education leads to better patient care. Let’s wish her well on Sunday and keep her in our prayers.

9:15AM One Room Sunday School on Zoom
10:30AM Online Worship
11:15AM Virtual Coffee Hour and Kids' Coffee Hour on Zoom