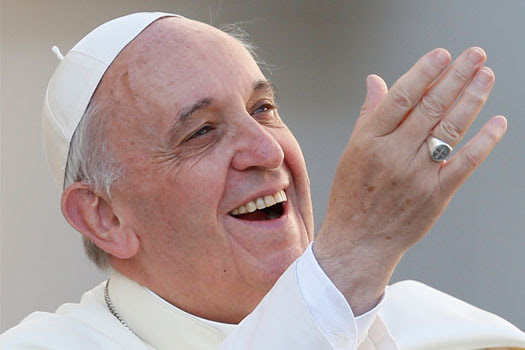 This week, I have experienced what Krister Stendahl coined as “Holy Envy” – the ability to recognize elements in another religious tradition that you admire and wish could, in some way, be reflected in your own religious tradition. I’ve seen pope emoji pop up on twitter, I’ve imagined his simple black leather shoes hitting the concrete as he walks to shake President Obama’s hand, and I’ve been captivated by the crowds who fill the streets with a great devotion just to get a glimpse of him zooming around in a little modest Fiat. And while I’ve been enchanted by the Pope’s visit this week, I know that this isn’t the case for everyone. Some of my dear friends, and even many in our community at St. Paul, have complicated, messy, love-hate relationships with the Catholic church.  It is important to recognize the entire spectrum of emotions that Pope Francis’ visit may stir up.

The Pope’s trip has made me re-visit the document put out by the Lutheran World Federation entitled, “From Conflict to Communion.” It is quite lengthy, but buried deep down (88 pages in) after a thorough discussion of our shared history and the individual gifts and wrongdoings of both Lutherans and Catholics, you’ll find this ecumenical imperative:  “Lutherans and Catholics must let themselves continuously be transformed by the encounter with the other and by the mutual witness of faith.”  For Lutherans, especially for those of us on the East Coast, it seems like a week that could – or perhaps, should - be ripe with encounter and conversation with our Catholic neighbors, co-workers, and classmates.

I know for me, I’m particularly intrigued by how this visit is in many ways unlike past papal visits as Pope Francis is spending a significant amount of time with people who are usually pushed out of the public eye. It seems as if the Pope is taking the words we heard in last week’s Gospel incredibly seriously, “Whoever welcomes one such child in my name welcomes me, and whoever welcomes me welcomes not me but the one who sent me." He has done this by visiting a prison in Philadelphia, Catholic Charities in D.C., and a school in Harlem. The reformist spirit of PopeFrancis’ papacy reflects many of the values of the Lutheran Reformation. In particular, his emphasis on climate change, income inequality, and poverty closely aligns with the ELCA’s goals for advocacy. The Pope’s visit has inspired me to pick up my phone and reconnect with several of the young and powerful Catholic women whomI became friends with during my time at divinity school. Hearing their stories of how they live out their vocations and sharing in our mutual frustration for the denial of women in leadership in the Catholic church, has given me much gratitude and energy for not only their work, but my own work.

While there is time and space to recognize our differences and critique problematic aspects of this visit, I think it is important to also ask ourselves, “How might our encounter with the Pope and our Catholic sisters and brothers (even if simply from social media or t.v.) transform us this week?” Continually, in our desire to transform, how might we - the people of St. Paul - live out our faith this week?